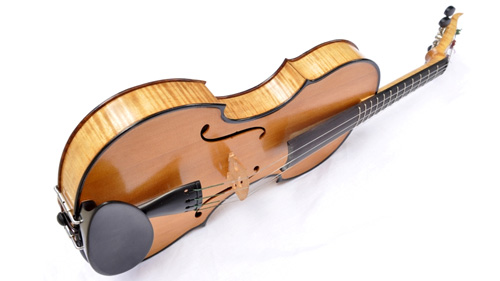 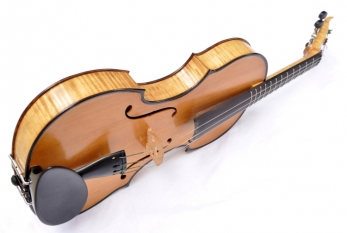 As I’m always looking for new timbres to explore, I decided to check what happens if I made a Neolin without archings. Primarily, I was trying to invent a feature which would add the Sitar’s buzz to the Neolins sound. That did not work out (so far), but concerning a new timbre, I wasn’t disappointed. The instrument is a bombshell, especially set up with the « prim » chromed steel strings. Tons of power, and a frank sound with a cutting edge to it.
Strung as it is, it easily supports down-tuning. A third isn’t a problem at all. Amplified, you get the impression that there is some distortion, but that’s actually the flat Neon’s sound !
If there is a thing as a « Rock-Neolin », this is it !
Played with a pick, it works even better than a fretted series-Neolin. There is more sustain, the sound is cleaner and more powerful. The difference is comparable to that between a flat-top classical and an arched jazz-guitar, which is more mellow.
As regards the technical side, I chose a cedar top and a rosewood back – after all, this is inspired by guitar-making. To keep down weight and to experiment a little more, I made the ribs and neck from maple, though.
To tell the truth, this Neolin isn’t absolutely « flat ». Back and top have 4mm high arching. Thickness is tapered much like on a classical violin, especially on the bottom. To reinforce the belly and to accentuate the slight arching, there are 4 bracings in the belly, as well as a soundpost. The bracing is much stronger than that in the standard Neolin, and follows another pattern.
Actually, this prototype is already nearly one year old. I did not introduce it before because I wanted to be sure that the table wouldn’t yield over time with the string pressure. But it doesn’t. The instrument is stable.