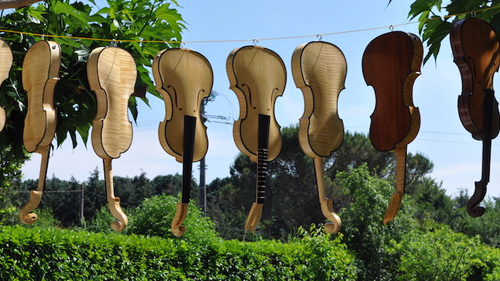 With the massive arrival of things 2.0, the Neolin too, passes into its second generation.

Although compared to classical violin making, the Neolins production was quite futuristic from the beginning, with the rough work done by a CNC mill following a digitized model, it was still possible to do better.
The trigger was the meeting of Yohan R., a customer passioned by violin playing and making, exercising the profession of CNC-designer.
The day he picked up his Mirecourt violon from an acoustic-optimization-cure, he showed me a 3D design he had made of a violin-belly. The arching, designed with trochoïd-curves, was far from being efficient or even realistic, but the important thing was to have had the idea and the skill and experience to realize it.
So we quickly elaborated a plan to redesign the Neolin in 3D, especially the archings, in a customizable way. Although it performs pretty well, we aimed at replacing the unique Neolin-model by a multitude of different arching-models conferring different sound-characteristics to the instruments.
The way there was long and difficult, but with Yohan’s skills in CNC-design and my knowledge of arching, violin-design and experiencee with the CNC-mill, we finally succeeded.
In the first place, we redesigned the default arching, then we defined customizable parameters.

To finish with, the whole had to be fed into a milling-program. Once again, we were complementary – Yohan with his programming skills, and me with my experience in milling, and fixing of the parts on the machine.

Having worked a lot with different wooden species recently (notably red cedar and rosewood), the temptation to try those customized arching on these wooden species was (too) great.

That’s what we finally ended up with:

The belly arching « 12,5 tunnel * », meant to add harmonics and a dusky quality to the 12,5 standard belly arching. Low and rather fragile due to its «tunnel » nature (which means that the counter-curves are quite pronounced as the arching approaches the edges), this arching exists for the time being only reinforced by bracing.

The belly arching « 14,5 tunnel », strongly influenced by Guaneri del Gesù’s work. It is meant to confer warm and powerful basses and complex harmonics. So far, I made one from spruce with bracing, and one from cedar without bracing, see hereafter.

The belly arching « 15,3 full », inspired by the classic Italian’s work and meant to confer a sound close to that of a classical violin. As this arching is rather high and thus sturdy, it is not meant to exist with bracing.

The belly arching « flat » – not really an arching with a height of 5,3 mm, but not entirely flat either. This is the belly of choice for the « Rock-Neolin », which so far only exists in a rosewood-cedar combination.

The belly arching « 14 stretched », meant to confer a powerful and direct sound. Designed but not built so far.

The back-arching « 14,5 tunnel » – similar to the corresponding belly arching and meant to give more complex harmonics than the standard belly, which has a fuller and more stretched arching.

The back-arching « 14 stretched » – same as for the belly, to be built and evaluated.

Now just imagine all the possible combinations between these archings, yet combined with different wood-combinations by using rosewood (clear sound with powerful treble harmonics, very easy response) and cedar (power, precision, rich harmonics) in addition to the classical spruce and maple.

* the maximum arching height in mm, measured from the top of the ribs.

The standard Neolin, 4 or 5 strings

… which you already know, or if you don’t check this website. With its pure and resonant tone, often qualified as « modern », this stays the version of choice for most current music styles. Especially so if you play amplified, as the amplified sound is all but indistinguishable from the acoustic sound.

The standtad Neolin without bracing

A nice try to get back to a belly with standard « classical » thickness and without bracing (the standard Neolin is thinner and reinforced with bracing). A slightly more direct sound with less reverb and stronger middle-range harmonics than the standard Neolin. Maybe a little better all-around talent as to repertory, but slightly less convincing when amplified.

Standard back, belly 14,5 tunnel in spruce with bracing – the first instrument I ever built – and I ever hear of, by the way, which sounds better 5 string than 4 string. The new choice for pure 5-strings.

A surprising result for this Neolin with the belly 12,5 tunnel with bracing, back 14,5 tunnel – the straightforward « modern » sound of the standard Neolin makes way for a sound with complex and generous harmonics. Works as well in classical as in Jazz repertory, maybe less so in current music styles. Complex harmonics means hard to amplify. It’s alright, but amplification is not the main strength of the « chamber » Neolin.

Belly arching 15,3 full in spruce (first choice with 70 years of drying in this case) standard arching for the back. A round and deep sound. Despite its name, it’s actually as fine to play in Jazz as in classical. Might be even more interesting with the 14,5 tunnel back.

The prodigy. Back 14,5 tunnel, belly 14,5 tunnel in red cedar. From bas to treble, this is pure bliss. Power, roundness, colour, character. In a « blind test » against classical violins, I’m sure this Neolin would be a very hard adversary. This comes at the price (besides the one you have to pay) – the harmonics are so rich and complex, that even the great boon pick-up restitutes them with quite some loss. Amplified, it stays behind its less flamboyant cousins. At the same time, i has so much punch that you probably don’t need to amplify it at all…

This is the least compromising of the brotherhood. Archings near flat, belly with 4 bars to resist the 5 string tension without arching, higher ribs to make up for the lost body-volume, exotic woods, fretted strung with « Prim », loud and agressive. This sound will rock you acoustically as well as amplified. Works great for celtic music, too.

A big Thank you to Gilles Bagur for having braved not only 5-string, but even fretted instruments 😉
Return