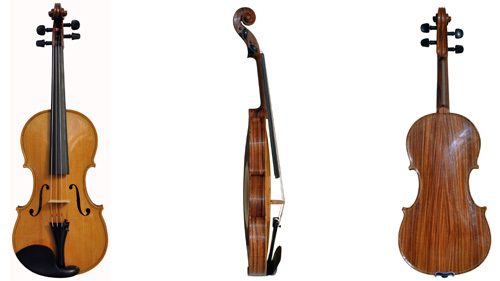 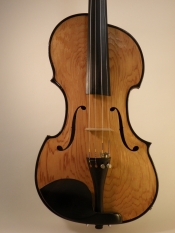 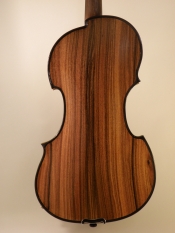 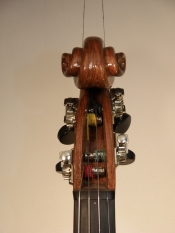 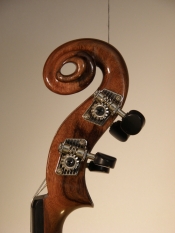 Making instruments in series can offer great possibilities for experimentation – if ever the idea does not work out, at least a part of the fruitless work has been done by the milling machine !

With these considerations in mind, in driven by curiosity, I set out to make a Neolin with bottom, ribs and headstock in rosewood, and the belly from red cedar. After all, those woods have been employed for a long time in guitar making. By chance, my furnisher had cedar in slab cut… you have to know that the last bowed instruments with slab cut belly have probably been made by som 3rd grade Italians in the 17th century. But as I wantes to experiment…

When working the rosewood, I quickly realised a significant difference in weight and hardness compared to the traditional maple. My tools did not really appreciate 🙁 In order not to end up with a leaden Neolin, I carved the bottom thinner, until I it was a bit less rigid, but still heavier than usual. The slab cut belly reserved a surprise of a different kind: Against my fears, it proved to be rather stiff, and very light. Finishing the slab cut cedar with scrapers was a nightmare – the least error and the wood fibres were ripping out. To avoid a head-heavy Neolin, I hollowed out the headstck and fingerboard. After all, work has been longer and more complicated than work on traditionnal wood, but part of this was certainly due to lack of experience with these woods borrowed from guitar making.

But I can assure you that the effort was worthwhile ! Under the varnish, the cedar revealed a beautiful golden hue, and the rosewood became a real orgyof warm yellows, browns and red-browns. When I set up the Neolin, I had a shock – despite the relatively high weight, the sound was great ! As powerful as the other Neolins, with a very dense and warm timbre, somehow midway between the frank sound of the Neolin and the more velvety timbre of the classical violin.

Effets on the Neolin: Wahwah with bow