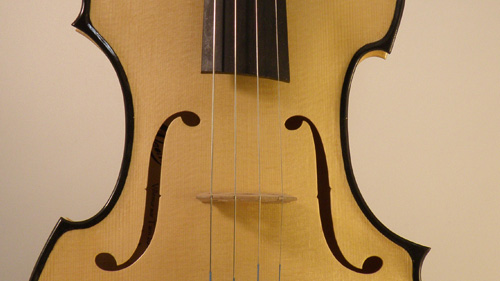 Since the production start of the Neolin in 2007, several customers have informed me about problems with the D’Addario Helicore strings, especially the a-string. The aluminum winding of this string does not resist to the frets, especially if you play with a plectrum.

That’s why I tried a bunch of different strings. My first preoccupation naturally was that the stings are in tune with the frets.

There are a couple of standard violin strings in chrome-steel out there which work pretty well. The steel-core guarantees the tuning in most cases, and the chrome winfing, being very hard, the durability.

My first choice are the “Thomastik-Infeld Superflexible”. Perfectly in tune, nice sound close to the Helicore (you can actually mix them up, or take only the a-string from the Superflexibles). Picked, the sound is clear and precise. They are jsut a little bit more expensive than the Helicore (and still pretty cheap for violin strings).

Another string from Thomastik-Infeld which works well is the “Präzision”. Perfectly in tune, powerful, cheap. The sound is a bit less warm than with the Superflexible. Picked, they are a bit more difficult to play, as they are more ridig than the Superflexible.

Another intersting string is the Swedish “Prim”. Extremely powerful, especially played picked. The tuning is irreproachable. However, the bowed sound is pretty aggressive. In my opinion, those could be great strings to play rock or metal, maybe folk music. If you use the antimute bridge with the Prim strings, no more need for distortion !

The “Jargar” are another brand from Sweden. The tuning is, I’d say: sufficiently good. Slight differences at the octave, but it stays bearable. I really liked the bowed sound, full, noble and subtle. Played with the pick, they are not worth much. The sound is muted, but you hear the “clac” from the pick very well. Good choice for people playing (nearly) exclusively with the bow. The Jargars are not really cheap – approximately 55 Euros public price.

The only set of strings with a synthetic core I found so far which are perfectly in tune with the frets are tha “Corelli Crystal”. On the other hand, the a-string is also aluminum wound, so it might not last very long. Anyway, I personally don’t find their sound very interesting. Moreover, the tremomo-chinrest does not really work with synthetic-core strings.

If you are (or want to be) the owner of an unfretted Neolin, anything will work fine. Personally, I like very powerful strings, like “Pirastro Evah Pirazzi” or “Thomastik Vision Titanium Solo) – combined with the natural power of the Neolin, you might end up checking wether you are amplified even if you don’t own an am…

Apart from that, I realized the the balance between the four strings is always irreproachable on the Neolin !

If you have any recommendations about strings for the Neolin, please let me know !

To fret or not to fret ?