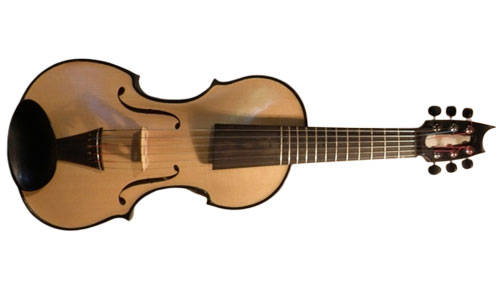 An idea by Franck Lopez (see page references): A 6-string Neolin tuned like a soprano-guitar (one octave higher) and fretted. Like that, the gitar-players “just have to” learn the bow technique, the left hand finding it’ way all alone !

The instrument is electro-acoustic, it actually sounds pretty well even without amplification. Although the shape is very similar to the Neolin, the construction is quite different: To resist to the tension of 6 strings, I decided to cut the ribs out of one massive thick board – they have a thickness of 4.5 mm compared to 1.2 mm bent for traditional ribs. This, plus a thicker belly and back, keep the belly from deforming with the pressure of the bridge. In order not to reduce the corpus volume too much, I made the ribs go to the outside of the edges, so there is no more overhang. Moreover, this increases the resistance to wear and look rather cool ! The belly has got the fibre-rosin edges of the Neolin, the back has got flat edges which melt into the  ribs. As the Neolin-guitar is entirely varnished with black Urushi except for the belly, it looks as if the latter was framed by the instrument. The tête is a modified version of the standard Neolin flat headstock. 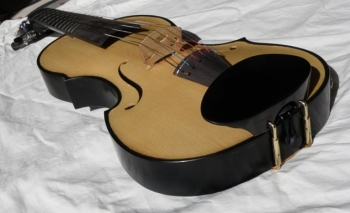 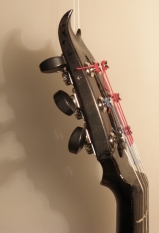 I conceived the instrument as a semi-solidbody ti be played amplified. I was quite surprised myself when it turned out to sound nicely even acoustically – it seems as if I found the good balance between stiffness of the body and tension of the strings / pressure of the bridge. A little bit by chance, a lot by feeling 🙂

The fingerboard is nearly flat at the upper saddle to permit easy playing of guitar chords if you play plucked mandolin-style. Towards the bridge, the fingerboard becomes rounded to end up with a bridge allowing you to play just one sting at a time with the bow. Yet the angle between the strings stays flatter than on a four string instrument, so you actually can bow 3 strings at a time with a bit of pressure.

In my opinon, this instrument should be, among other things, very interesting to bow guitar chords in arpeggio !

A composition by Mathias Guerry on the Neolin